Where does the time actually go? I swear just last week I was commuting down to San Diego to work with the 710 Beach Rentals team on updating their office space, fighting the traffic both ways and working and reworking the plan to fit in the budget.

Alas, no. I actually finished this project back in April and have honestly been meaning to share the pictures and thought process behind it all but life and new projects are always popping up and updating the website somehow always gets pushed onto the back burner.

Anywho, we are here now and that’s what counts!

I started meeting with the owner of 710 late last year – the team was potentially growing but the space they’d resided in for the last several years was not. The owners also had no interest in moving out of their SUPER prime Mission Beach location with three attached parking spaces. If you know anything about parking in San Diego then you know what a big deal having allocated parking can be.

Ideally we were getting together to find out if they could maximize the existing office space in a manner better suited to the new team size. However, The second I stepped into our meeting I knew the team there would benefit from a big dose of design help too.

Not only was the space not being used to its full potential but everything in the offices was a collection of hand me downs and mismatched bits and bobs.

The owners are young, successful entrepreneurs who had jumped at the opportunity to have a Mission Beach office space but not much about the office they’d been in for the last couple years said high end real estate rentals.

Sooo much beige. I know beige is having a moment  – but this is not it.

Truly a tale as old as time, what started as a simple seating plan proposal quickly escalated into a full on re-design.

Plagued with low ceilings, tiny disjointed rooms and beige everywhere (have I mentioned the beige?) the space was screaming for modernization and opening up but the problem was 710 Beach Rental’s was actually RENTING their own offices. Twist.

Add into this potent mix of design conundrums a fairly tight budget and I knew that everything we did was going to have to be cosmetic, smart and wallet friendly.

In General, we wanted to update the office to create a cohesive and professional look throughout while maximising the space to accommodate a growing team.

This space should be mature and considered but also familiar. A lot of the 710 clients return year after year and I wanted the office to still feel recognizable during their next visit.

I approached the overall design with modern elements in mind to bring an overall fresh and refined feeling to the space.

We wanted the offices to feel masculine but also to pay homage to the stunning San Diego beaches just across the street.

The design would be a mix of light blue and deep dark grey walls with textured, neutral carpet. Aged wood walls paired with warm leather seating and dark office furniture would brings a sense of casualness into the space. 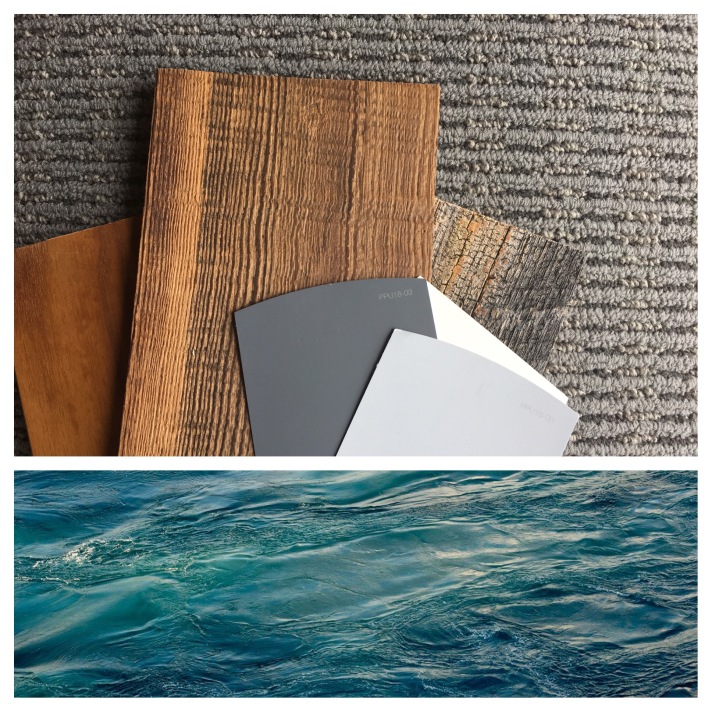 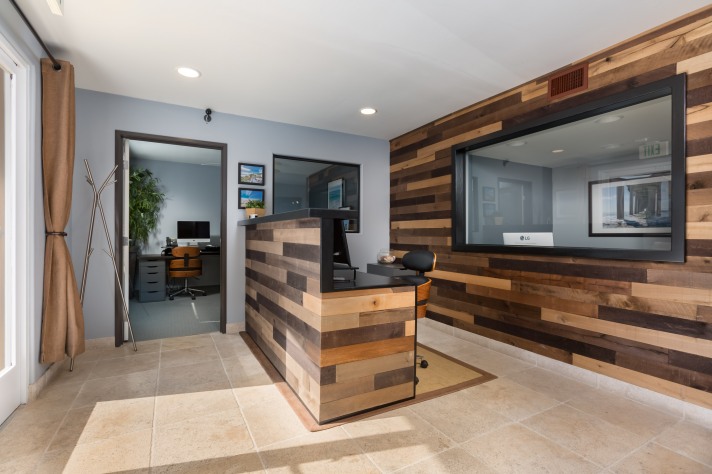 As a reminder – here’s a comparison before and after: I definitely feel that we accomplished everything we set out to do and the team settled into their new offices quite happily.

The offices ended up a perfect mix of IKEA hacks highlighted with a few mid century elements and local San Diego photography. As always, I made to sure to design in areas with greenery to give it that extra dose of “lived in.” I ensured the plants we picked were really great faux versions knowing they would remain looking fresh year round in an office environment.

It was incredibly interesting working on a commercial office environment and it really made me think beyond just how someone lives at home but instead how a group of people and their clients interact and need to function in a shared space. I’m excited that this is something we got to explore more on our recent salon client here in Orange County. I know I haven’t posted ANY images here or even on social media of that space but I promise I am working to get those to you soon!

One thought on “before + AFTER // Real Estate Office // San Diego”